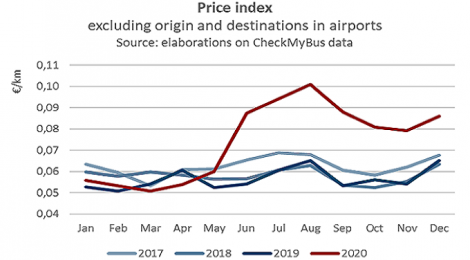 Milano, 04.05.2020. It is now available online the latest issue of the “Italian Long-Distance Coach Transport Market Report”. Published thanks to the agreement between TRASPOL and the search-engine Checkmybus.it, the new annual report provides an overview of the last three years, investigating the evolution of the market from 2017 to 2020. 2020 has undoubtedly been a year “out of the ordinary ”, this report also aims to highlight how the COVID-19 epidemic has had an impact on long-distance bus transport in Italy.

The report is based on the sample of prices collected by the sales platform and describes the profile of bus users, the prices charged, the main domestic routes and the most requested locations, with a specific focus on inter-regional airport connections.

← Confronto offerta e prezzi ferroviari nel periodo natalizio 2019 e 2020
TRASPOL REPORT 3/21: “Rapporto indipendente su Trenord 2010-2019. Offerta, produttività e qualità″ →
We use cookies on our website to give you the most relevant experience by remembering your preferences and repeat visits. By clicking “Accept All”, you consent to the use of ALL the cookies. However, you may visit "Cookie Settings" to provide a controlled consent.
Cookie SettingsAccept All
Manage consent